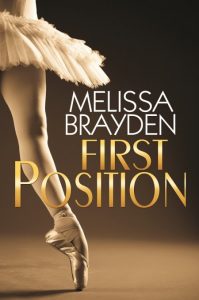 Anastasia Mikhelson is the rising star of the New York City Ballet. She’s sacrificed creature comforts, a social life, as well as her own physical well-being for perfection in dance. Even her reputation as The Ice Queen doesn’t faze her. Though Ana’s at the peak of her career, competition from a new and noteworthy dancer puts all she’s worked for in jeopardy.

While Natalie Frederico has shown herself to be a prodigy when it comes to ballet, she much prefers modern dance and living on her own terms. Life is too short for anything else. However, when the opportunity to dance with the New York City Ballet is thrust upon her, it’s not like she could say no. Dealing with the company’s uptight lead is another story, however. When the two are forced to work side-by-side, sparks begin to fly onstage and off.

I love this book. I’ve read this many, many times. I have also re-read Strawberry Summer and Waiting in the Wings multiple times. I love these stories! Also, I really wish many of your books would be made into movies. There are so many good lesbian stories out in the universe to read but there aren’t very many good lesbian movies! I look forward to your next novel!