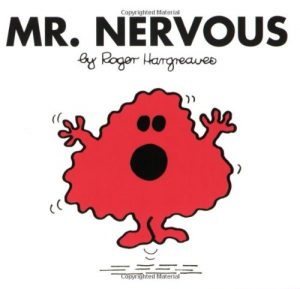 When I was a kid, I loved the Mr. Books. Do you remember those? “Mr.” (insert adjective here) would set out on an adventure that would draw attention to his particular attribute. There was Mr. Happy, Mr. Clever, Mr. Busy, Mr. Chatterbox (I loved him!), and many more. (Don’t worry. They came out with a whole series of Miss books too).

At four years old, I was frustrated that I couldn’t read. I tried daily. However, I listened intently as my mother read the Mr. books to me before bed each night. I came up with a four year old plan. I memorized Mr. Nervous – probably not word for word, but close enough – and carried the book to my mother, explaining that I had learned to read! Gasp! Surprise! She smiled and indulged me and my atrocious lie as I attempted to recite the book and turned the pages where I thought I probably should. In other words, she humored me. She’s a nice lady. I could not read. But boy was I nervous (shout out, Mr. Nervous!) about attempting to prove myself. I think that’s the first time I’d ever felt nervous (at least that I can recall).

Nerves have been a part of my life ever since. Nervous talking to new people, the first day of school, auditions, dates, a job interview. We all get nervous and it’s never fun. However, I’ve managed to find a few work arounds. I’ve learned ways to use it to my advantage in theatre. Put it into your performance! Harness the nervous energy! For the most part it works. Then there’s the old, “Fake It, ‘Til You Make It” routine. I’ve actually found that one works quite well.

Publishing is a little different. I have a new book coming out next month and between you and me, it’s nerve wracking. Mr. Nervous would get that. It’s like taking a little piece of yourself and posting it publicly for the world to consume, and in some cases, scrutinize. What if they hate it? What if they hate me? Will I still be allowed in public places? Will the mailman still deliver to my house? There’s lots of drama.

But since we’re talking privately, I’ll say that I think nerves are actually quite good for us. They keep us humble, and vulnerable, and serve as a reminder of our humanity. So as April and the release date of Just Three Words approaches, I’ll spend a little time reading about Mr. Nervous and remind myself that I am not alone.

Just Three Words- due out in April.

All right, indeed stage fright is natural.
On the other hand, I think it’s not really possible to hate Samantha… she’ll do fine! ^_^

Sent from my iPad