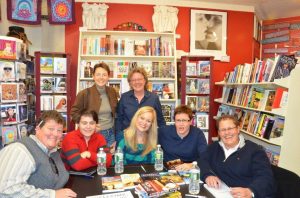 I’m back recently (okay, last month, sometimes I exaggerate) from the highly enjoyable state of Massachusetts. Listen, I love this place. This New England. So quaint, so chilly, so circular. That last part was a rotary reference. We don’t have those things in Texas, hence my preoccupation with going around and around and around before ever getting off of one. Fun times.

The event that drew me to this part of the country was Women’s Week 2012. If you haven’t attended this thing and you’re a woman and you enjoy the arts, you need to put it on the trusty to-do list ASAP. You’ll thank me one day. I wouldn’t steer you wrong. I’m one of the good guys.

So I arrived in Boston on a blustery Wednesday night and made my way to the rental car place where they let me pick out any car I wanted! I know. I couldn’t believe it either. Generous! As I know very little about cars, I did my best to look painfully thoughtful before walking to the closest one and hopping in. It seemed friendly. I still don’t know its make and model. (Again, bad with cars).

I headed into Boston in my nameless vehicle with no concept of where I was or how to get anywhere…and it was dark…and rainy…and the GPS lady was only talking to me in German.  It was a problem. It took me fifteen minutes to de-Germanize her and hit the road to the small town of Plymouth where I had a room for the night waiting. It was close to midnight when I arrived but I had to explore the place. I took a late night walk by the water. (Don’t worry, my mother has already lectured me). What a sleepy place, I thought to myself.  Very quiet.   The next morning was an entirely different story, however. The city was wall-to-wall school buses, children and lots of pilgrims in character. Jackpot. Oh, how I wanted to stay with these pilgrims all day and churn copious amounts of butter. But it was time to hit the road to Provincetown.

The drive was beautiful. I remembered that part from last year and the fall leaves did not disappoint. How I heart autumn. I slid into Provincetown, parked my friendly car and had a fantastic lunch with Bold Strokes buddies who were nice enough to save me a spot at Governor Bradford’s Restaurant. And we were off…

The next three days were a whirlwind of books, food, fun and let’s be honest, a little mayhem. You always need a little. Here are the highlights:

A Little Lip Action. Up first was the “kissing scenes” panel where I got to learn a little more about my fellow authors and the magical world of kissing and the crazy tension that leads up to it. Nell Stark moderated this one and found herself engaged to be married to Trinity Tam by the end of it!  Now that’s what I call a productive session.

Oh, Look! Lucky people spotting happened on this trip. When traipsing through the center of Provincetown, you never know who you’ll run into. Famous author sightings on Commercial Street included Karin Kallmaker, Pol Robinson and Mari SanGiovanni. Trust me, I grabbed hugs.

Sweet Nothings. Did you know Georgia Beers recorded an audio book of Starting From Scratch?  She did and I got one.  She reads to me daily now. You wouldn’t believe the things she says. Next up is Radclyffe’s Safe Harbor narrated by none other than Diane Gaidry. Pretty cool.

Taco. Can I Get A Taco? Saturday morning brought with it breakfast tacos sent from heaven. Not really. They were actually from Carsen Taite and sous chefs, Nell Stark and Trinity Tam. Honestly, these were the best breakfast tacos I’ve ever had and I’ve had a lot. I begged Carsen for the recipe and have since made them for myself and others…twice.

New to the Scene. New Authors. These guys were impressive. I met Robin Silverman, Barbara Ann Wright, Jennifer Lavoie and Nora Olsen who all showed themselves to be smart, well spoken and FUNNY people.  Favorite moment of the trip might have been VK Powell screaming Barbara Ann Wright’s name like a crazy fan girl across Commercial Street. I laughed so hard my stomach hurt for an hour after.

What’s Your Problem? The second panel I participated on was all about conflict in romance. I struggle writing conflict so I had to fake it a little. I really enjoyed the readings on this panel though. Let me just say that Rachel Spangler rocked it.

Cold Hard Cash. Good news!  If in need of cash on the go in Provincetown, you’re in good shape. With the help of Carsen Taite and VK Powell, I was able to ascertain that there are approximately eight ATM’s along Commercial Street. You’re welcome. Why so many, you ask? It keeps me up at night.  I’m still investigating.

In reluctant conclusion, it was a really great trip up north and it will most definitely not be my last. Check out more photos on my Facebook page. If you haven’t experienced Women’s Week, what are you waiting for?

Come out and play next year.

Oh, and pick up my new book, Heart Block. It’s out there now!

Lainie, Yes! We have to Laverne and Shirley this thing next year and make it to that vineyard. “We’re gonna do it.” In other news, I love that theme song.

I a reading ‘Heart Block’ now and really enjoying it. I wish I could go to WW one year but pesky money and the hemisphere thing keep getting in my ay.

The hemisphere can be tricky. 🙂 Glad you’re enjoying the book, Dev! Maybe WW one day…

I have checked your page and i have found some duplicate
content, that’s why you don’t rank high in google’s search results, but there is a tool that can help you to create 100% unique articles,
search for: SSundee advices unlimited content for your blog